The mission of  Boltakarachi is to  highlight positive side of Pakistan . roda1969@yahoo.com

In this article we will try to discuss the great achievements of  Dr Amjad Saqib (Sitara-a-Pakistan)  and its brain child Akhuwat Foundation. 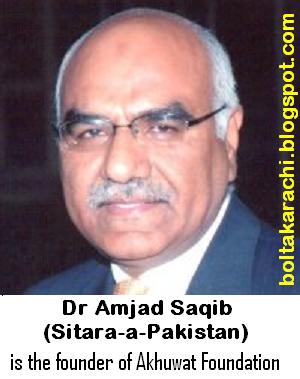 Dr Amjad Saqib is founder of Akhuwat, first ever interest free microfinance programme. This programme operates from mosques and churches and has opened new vistas in the domain of social mobilization and poverty alleviation. This is the largest individual based lending programme in the country and is referred to in many international universities as a unique and innovative model in microfinance. He is Akhuwat’s Executive Director and main driving force since its inception in year 2001. Keeping in view his management experience and volunteer services for poverty alleviation, he has been requested by the Government of the Punjab to lead two of its flagship programmes i.e. Punjab Educational Endowment Fund and Punjab Welfare Trust for the Disabled. President of Pakistan, on account of his contributions for poverty
alleviation, has awarded him “Sitara-a-Pakistan” in 2010.

A poverty free society built on the principles of compassion and equity.

* To provide interest free microfinance services to poor families enabling them to become self reliant.
* To promote qard-e-hasana as a viable model and a broad-based solution for poverty alleviation.
* To provide social guidance, capacity building and entrepreneurial training.
* To institutionalize the spirit of brotherhood, compassion, and volunteerism.
* To transform Akhuwat borrowers into donors.
* To make Akhuwat a sustainable, growth-oriented and replicable organization.

* Experience of more than nine years.
* Trained workforce of more than 200 employees.
* Equipped with fully developed policies, processes and systems.
* Support of more than 700 local donors.
* Registered with Government of the Punjab and Pakistan Center for Philanthropy (PCP).
* Registered with Pakistan Microfinance Network (PMN).
* Enviable growth in last eight years.
* Loan Recovery rate of 99.85%.
* No discrimination on the basis of religion, political affiliation, caste, colour or ethnicity.
* No interest, profit or loan processing fee is charged from the borrower.
* Presence in 22 cities and towns in Pakistan.

Akhuwat was established in 2001 with the objective of providing interest free micro credit to the poor so as to enhance their standard of living. The organization started with a first loan of Rs. 10,000 which was given to a widow. This brave lady did not believe in charity hence she asked for qarz e hasna. She purchased two sewing machines and started a small boutique in her house. She worked so hard that in six months she returned the loan. During this period she also ran her house and married one of her daughters. That was the beginning of what later became a movement.

Akhuwat is dedicated to improving the lives of the poor; those who are financially abused, abandoned and disregarded by society. As a registered non-governmental organization, Akhuwat provides the poor with interest-free loans so that they may acquire a livelihood and the skills and support they need to reach their full potential. To this end, Akhuwat raises its funds from Civil Society. It does not depend on international funding; instead it uses the spirit of volunteerism and the tradition of giving, a cardinal principle of all religions.

Akhuwat derives inspiration from the Muslim spirit of muakhaat or brotherhood. The earliest example of muakhaat was first displayed by the citizens of Madina at the dawn of Islam, when they shared their wealth with the immigrants or muhajirin of Mecca. Akhuwat’s philosophy is based on the principle of Qarze-e-Hasna, helping someone in need with interest-free loans, which is favored over charity. From a first loan of Rs. 10,000, Akhuwat’s total disbursement has now increased to Rs. 760 million in just over nine years. Akhuwat’s greatest success is that it has been instrumental in helping more than 67,000 families move from being dependent on others to being self-sufficient. The success stories of these people bring hope to those still in need of help.

Akhuwat started its operations in Lahore and to date has fifteen branches in this city. It has also expanded to Rawalpindi and Faisalabad in collaboration with the Chambers of Commerce and Industry and philanthropists of these two cities. Besides these big cities it has opened branches in other cities like Bahawalpur, Multan, Gujrat, Dera Ghazi Khan and Karachi. Akhuwat has also expanded its programme in small cities and towns like Kot Mitan (Rajhanpur), Miani, Kot Momin (Sarghoda), Chiniot, Dijkot, Samundari, Lodhran, Jehanian, Duniyapur, Nain Sukh, Chunian, Changa Manga (Kasur), Choti Zaireen (Dera Ghazi Khan), Bahawalpur, Sheikhupura and Khairpur(Sindh). Few more branches are under process in Sahiwal, Rahim Yar Khan, Bahawalnagar, Peshawar, Mardan and Farooqabad. Akhuwat’s model is also a part of curriculum at University of Southern New Hampshire USA and Lahore University of Management Sciences (LUMS). All this has been made possible because of the tireless efforts made by our dedicated staff. Akhuwat sincerely appreciates and is grateful to hundreds of individuals and families who have donated money, time and skills to this cause. We would like to introduce Akhuwat to a wider audience like development professionals microfinance experts, international donors, media, religious Scholars and above all the Philanthropists and community at large. As some one said, “Akhuwat is a fine example of civil society at its best”. The objective is to present this fine example to others. Together we all can make a big difference. You all have shared not only your time and resources, but also your compassion. It is because of your generous support that Akhuwat is, and will continue to be, an inspirational place – a haven, where hope for the future blossoms.

Interest Free Micro Credit: Akhuwat provides the economically poor with interest free loans so that they may acquire a self-sustaining livelihood. It also provides the skills and support they need to actualize their full potential and abilities.

Reliance on philanthropy: Since its inception Akhuwat has solely relied upon the philanthropists in extending its services to the community. However, in order to fulfill the increased credit needs of its ever-increasing clientele it is now willing to work with the international donors as well.

Spirit of Volunteerism: The spirit of volunteerism that Akhuwat’s management and its team members exhibit is indicative of the success Akhuwat achieved within a short span of time.

Family loans: Family loan is the most common type of loan that Akhuwat offers to its clients for setting up or expanding a business. Income from this business is jointly shared by the whole family. The loans given by Akhuwat are co-signed by male and female head of the family. Akhuwat believes in strengthening family unit as some studies show that separate loans to male and female in a family may result in tensions in the family and hence may cause disintegration of this important institution.

Linkages with mosque and church: An important and novel idea associated with individual loans is the use of the local mosque/church infrastructure as the center for loan disbursement and as an avenue for community participation.

Combination of individual and group lending program: Diversification of loan portfolio by offering different loan products has helped to increase the outreach of the organization.

Credit plus approach: Akhuwat has employed a credit plus approach by introducing the idea of social guidance for its credit beneficiaries. The purpose of this approach is to help borrowers flourish their small enterprises so that they can lead socially healthier lives than before.

You can donate to Akhuwat by sending a cheque payable to Akhuwat on our official address given on the website or you can directly deposit your donations in the account details given below:

Account Title: Akhuwat UK Trust (cheques should be written under this name)