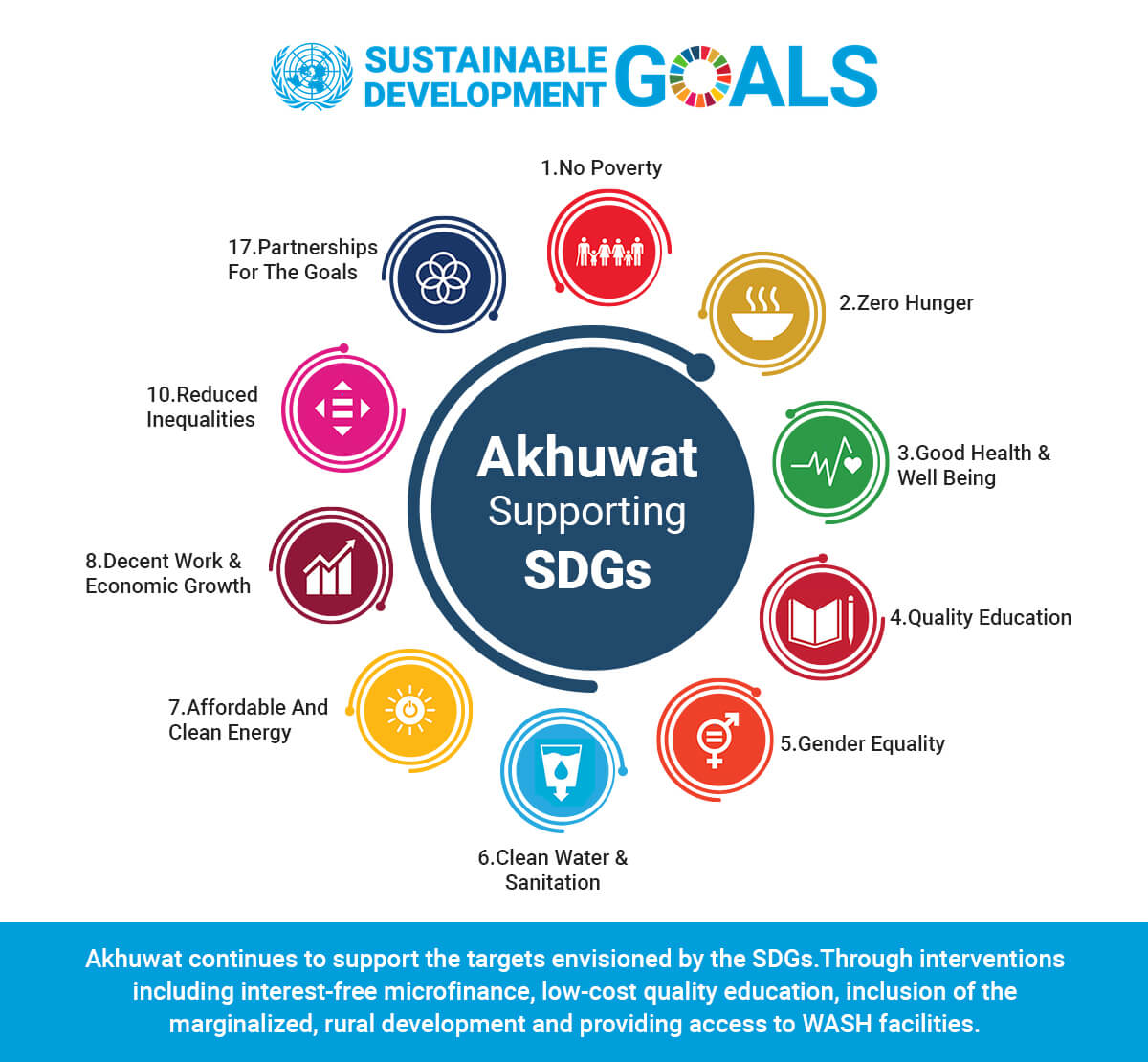 Pakistan was the first country to adopt the SDGs 2030 agenda through a unanimous resolution of parliament. Like the fellow countrymen of our nation, we at Akhuwat have committed to playing our part to make the world into a safe haven for our children and the generations to come. Akhuwat’s vision coincides with the first SDG i.e. No Poverty as it aims to create a poverty-free society. Through its projects, the organization targets a total of ten SDGs. The instrument used to alleviate poverty is interest-free microfinance, which caters to the economically marginalized segments of Pakistan. Since its inception in 2001, Akhuwat has given loans to 4 million families amounting to roughly USD 719,460,000 (PKR 119 Billion). SDG # 2 i.e Zero hunger is also directly focused upon by Akhuwat Food Bank which distributes food in a dignified manner to deserving families . Good health and well-being, which SDG # 3 is promoted through the Akhuwat Health Services (AHS) which serves the poor through affordable, efficient and effective health care in various capacities. promote Mental wellbeing is promoted by encouraging open dialogue at monthly communal dialogues and counselling services at the Fountain House Mental Health Institute. Akhuwat Education Services (AES) is working on SDG#4 i.e. Quality education. Established in 2016 , the program has ten ongoing projects including Pakistan’s first fee-free University in Kasur. AES is preparing a new generation of leaders that will transform their communities and the future of Pakistan. SDG# 5 i.e Gender Equality is fundamental to a progressive society, which Akhuwat has been promoting since its inception. Akhuwat College for Women and Akhuwat Khwajasira Support Program are projects directly aiming to support and empower the marginalized genders of the community. All loans given through AIM ensure inclusion and equal participation of all members of the household. SDG # 6, Clean water and sanitation is promoted through the various community uplifting projects that are underway at Akhuwat. This includes the Kasur MawaKhat Program which empowers the community to transform their once neglected village into a happy and healthy living space with proper sanitation and facilities. The project also promotes SDG#7 i.e. Affordable and clean energy by encouraging the use of solar energy in order to carry out work on the fields. SDG#8 i.e. Decent work and economic growth is encouraged through all our economic interventions including microfinance loans, cash transfers, professional development services at our educational institutes and job placements for our Khwajasira community. SDG#10 i.e. Reduced inequalities is address through every ongoing Akhuwat projects as we aim for an inclusive society, one that caters to all. SDG# 17 i.e. Partnership for goals is one that is the driving force behind Akhuwat’s growth model. Since its inception, Akhuwat has joined hands with various stakeholders including provincial and federal governments to achieve their collective vision of creating a poverty-free world based on the principles of compassion and equity. All these efforts fall under the umbrella of the SDGs and aim to fulfil the dream that these goals envisioned for our world in 2015.